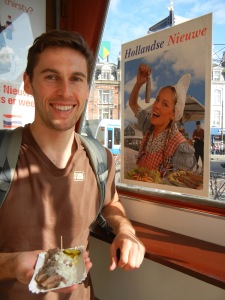 A happy me. Will it last?

Want to impress a pretty lady (mooie dame)? Need to fit in with the other gents (heren) nearby? Eat some herring (haring). Yep, the Dutch are nuts for these silvery “treats.” After some unnecessary background information, because I love history and have no restraint, I’ll let you know my verdict on these raw “delights.”

Popular since the Dutch pioneered the preserving method in the Middle Ages, the immature herring are ripened in a mild brine for several days. The fish are cleaned before brining, with the exception of the liver and the pancreas (gross) because those organs add flavor (gross). The Dutch brine is weak compared to the German style and the modern day process requires the underage fish to be frozen to minus 45°C to avoid infection by nematodes (gross). After eating the juvenile fish, consumers must introduce themselves to the neighbors as pedos.

Rain can get in the way of crowds.

This snack is called soused herring, maatjesharing to the Dutch or just maatjes if you want to be cool and like abbreviating. They’re sold at dozens of little huts around Amsterdam. You’ll know them by the Dutch flag, the signs proclaiming “Frens Haringhandel” or “Hollandse Nieuwe,” and the throngs of Dutch people in line. If these signs are too subtle, the rancid fish smell should provide the needed clarification.

Before refrigeration was widespread, and nematodes were discovered, the Hollandse Nieuwe was only available in the spring, after the first catch. Celebrations like the Vlaardingen Herring Festival and Vlaggetjesdag in Scheveningen honor this first catch of the year. The first barrel of fermented nubiles were traditionally auctioned off to charity. Nowadays herring is available year round, but the tradition of auctioning remains. How much would you pay for a barrel of nearly raw bait? The auction in 2011 raked in €67,500 (gross).

If you’re still reading, thanks. The unbearably boring history was a palate cleanser because you need a clean palate for raw fish, onions, and pickles. Lest you be flagged immediately as an outsider, please leave your civilized manners and love of utensils at the door. While you’re at it, leave fear of mildly awful smells and slippery textures at the door too. And, take of that terrible “Legalize it” shirt, dummy, you’re in Amsterdam. Also, grow 6″. Now you’re ready to fit in while eating your herring. 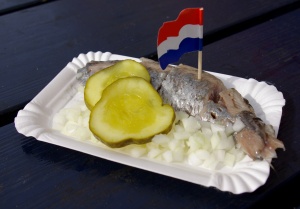 It’s hard to describe the taste of herring. I want to describe it as a combination of the hearty texture of Cod without the “fishy” smell, like salmon. Then picture the buttery taste of a good piece of tuna. Now, realize that I’m lying. Herring tastes nothing like this. It’s slimy, pungent, and salty. That’s not to say it’s bad. In fact, I liked it quite a bit. The onions on the side give a nice, sharp bite that cuts the oily, savory taste of the herring. You have the option to eat it with pickles, but you shouldn’t. I know some may say that’s my opinion and it’s okay if I’m wrong. Well, I don’t dole out opinions, I deal with facts. Pickles are not a good accompaniment to herring. I don’t need pickled cucumber (komkommer) with my pickled fish.

Herring is served on a waxy cardboard plate, either cut into three pieces or served intact. The most traditional way to eat herring is to dip them in your onions and pickles, cock your head back, and scoff the thing down. That’s a kind of deep throat I don’t need, politically speaking of course. Some vishandels will cut your herring into three pieces. These places will thankfully give you a mini-spork, which makes the eating marginally less embarrassing. If you’re particularly lucky, your vishandel will give you an option of eating your herring on a piece of rye bread or roll (‘broodje haring’).

I know for a fact that I have not been clear. I like Hollandse Nieuwe a lot more than Liz. She gave an “Oh dear god” look when she placed the slippery beast in her mouth. I certainly don’t love it, but the silvery treat is good. Herring was once an incredibly important cash crop for the Dutch, and a lot of other northern countries prize this little “treat.” Try it. Love it or hate it. Repeat? Regardless, you’ve experienced something particularly Dutch and you haven’t had to eat rotting herring like Swedes, which is real (gross).